Join us for the 3rd Annual Pumpkin Patch Tasting on the Tap Takeover Podcast! 2019 may go down in history as the year that we not only ruined pumpkin pie for Andy, but we may have also ruined rum for him. Jesus has included a wide variety of traditional pumpkin beer styles as well as some pretty weird entries to the tasting. Plus we’re joined by a special guest, our videographer and music man Vincent Clore! Grab your favorite pumpkin beer and laugh along with us. Cheers and Happy Halloween! ??

Join us this week for the 3rd Annual Pumpkin Patch Tasting with the Tap Takeover Podcast! Lots of spooky new pumpkin beers to review in 2019. And thanks to Vincent Clore Productions for the wonderful video work! Cheers!

As we close out our beer festival season coverage here on the Tap Takeover Podcast, we come now to the granddaddy of them all – The Great Taste of the Midwest! Often called one of the greatest beer events in the world, sometimes called Christmas in August, and many times simply referred to as “being welcomed home, The Great Taste in Madison, WI is put on by an army of volunteers who help the entire endeavor run smoothly. This year, we talked with a number of “rookie” brewers who were pouring at the fest for the first time, as well as some heavy hitters who have been around the fest a time or two. Old friends and new faces alike, and the Tap Takeover podcast is here to bring our listeners along for the wild ride! Plus, lots of breaking news from Old Nation, Hop & Barrel, The Brewing Projekt, 3 Sheeps, Hop Butcher, Listermann, Mobcraft, 2019 Great Taste Chairman Jason Walters, Mikerphone, Dan Carey from New Glarus, Revolution, Central Waters, Goose Island, 3 Floyds, Funk Factory Guezeria, and Great Taste Head Brewery Liaison Fred Swanson. Grab a bottle of your favorite rare beer and join us for the fun! Cheers!

What was your favorite part of Great Taste 2019? Join the Tap Takeover Podcast this week as we relive our amazing experiences at the 2019 Great Taste of the Midwest and find out what makes Great Taste so great for all of us! Thanks again to all of the heroic organizers who dedicate their hard work to this festival each year. And special thanks to Vincent Clore Productions for putting together this wonderful video for our listeners to enjoy. Cheers! 🍻
Full Podcast Episode coming this Thursday, but enjoy a sneak peek from Revolution Brewing, Hop Butcher for the World, Old Nation Brewing Co., Mikerphone Brewing, Listermann Brewing Company, The Brewing Projekt, 3 Sheeps Brewing Company, and 2019 Great Taste Chairman Jason Walters!

Great Taste of the Midwest coverage coming next week from the Tap Takeover Podcast! Brace Yourself! 🍻

The 2019 Joint Beer Fest at Eagle Park Brewing was a gloriously unique event to behold. And the fellas at the Tap Takeover Podcast are taking all of our listeners along with us to experience the fun! We’ll discuss the Wisconsin liquor laws which necessitated the collaborative nature of the event, the breweries involved in the collaborations, and a number of fun stories about brewing and happy coincidences. In this episode we spoke with:
Adam from Untitled Art
Alexander from Dangerous Man
Alex and Eric from Lion’s Tail
Max and Jackson from Eagle Park
Mike from Mikerphone
Shaun from Phase 3
Aaron from Lupelin
and Mark from Drekker
Grab a can of Booze for Breakfast imperial stout and join us! Cheers!

A fan-favorite has opened a new taproom in Milwaukee! Join Alex, Andy and Jesus as they sit down with Danny McMahon, the head brewer of Hacienda Beer Company. Recorded during the soft-opening of Hacienda’s first dedicated taproom, learn how Hacienda was started as a sister brewery to Door County Brewing Company, which beer styles Danny really loves to brew, where and how the beer names come from and why beards are awesome! Grab a pint of Everything Eventually Hazy IPA and enjoy the fun. Cheers!

On this week’s episode, we’ve got a brand new Brewery in Milwaukee! Join Nick Kocis from Dead Bird Brewing as he goes behind the mics with the Tap Takeover Podcast to discuss the brewery’s long-awaited move from Madison, the construction of the new space and to discuss the origin story of the Dead Bird name! And it wouldn’t be a Tap Takeover Podcast without a tasting, so Nick brings a couple of his favorite brews for the guys to try out. Grab a bottle of Wine Thief witbier and enjoy the latest episode! Cheers!

The most wonderful time of the year is upon us again – it’s time for the Great Taste of the Midwest 2019! Come join us at the Tap Takeover Podcast for our annual preview episode as we sit down to share a few pints and a few stories with organizers of the event, Fred Swanson and Jason Walters, as well as our hosts Scott Manning and Rory Nienajadlo from Vintage Brewing. We’ll discuss the ticket-buying events at the tail end of Madison Craft Beer Week, some tips for newbies on surviving/enjoying the Great Taste, and some insight into the brewery selection lottery. Plus lots of amazing stories from years past! Grab a pint of Mosey IPA from Vintage Brewing, and join us for all the news you need to know before the fest. Cheers! 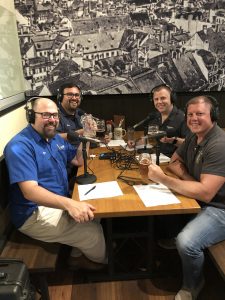 Tune in for a special edition of Beer News! In this beer festival edition, Jim and Jesus sit down with Josh Strupp and Jason Rohloff of the World of Beer Fest. A fantastic beer fest on June 22nd, 2019 sponsored by the Beer Barons of Milwaukee, tune in to hear all about the awesome beers awaiting you, and find out about some rare beers available to General Admission attendees. (Spoiler Alert, the only draft kegs of Drekker and the latest R&D from New Glarus!). Learn what separates WoB from other fests and how you can safely and responsibly make it to the fest and back home. We’ll also discuss how a homebrewing club started one of the longest running fests and what you can do if you want to learn how to brew your own. Grab your favorite dark German lager and get ready to buy your tickets to this premier beer fest! Prost!