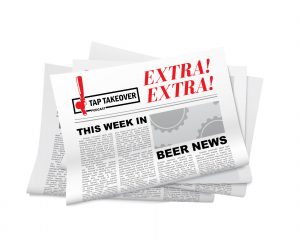 Stay up-to-date with a quick 5-minute Installment from the Beer News Department at the Tap Takeover Podcast! Certified Fresh as of 04/26/18. Grab a pint of Next Door Brewing Co. Bubbler Blonde Ale and join us. Cheers! 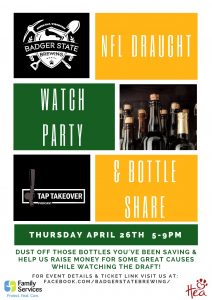 The Tap Takeover Crew is at Tomken’s-Friendly Fried Chicken for a beer dinner featuring special wing sauces from Flyin’ Brian the Wing King, paired with brews from Mobcraft Beer! Mobcraft brought out some of theirs flagship beers as well as some special releases for this event, including our very own Solid Non Fail Stout! You’ll hear how Flyin’ Brian got his nickname and how he comes up with his sauce recipes. You’ll also hear from friends of the show Maggie Skinner from Girls Pint Out and Henry and Nick from Mobcraft. Lots of great beers and wings were had by all, come listen in to all of the fun! Cheers!

This week out of the TTP Beer News Department, Andy sits down with Mike, Kyle, and Mike at Mikerphone Brewing to get the lowdown on the upcoming Smells Like a Beer Fest and Barrel-Aged Imperial Smells Like Bean Spirit Release on 4/28/18. Join us for all of the amazing details! Cheers!

The Tap Takeover Podcast Crew pays a special visit to one of the hottest new breweries in Milwaukee, to visit with owner and head brewer Kyle Vetter at 1840 Brewing Company. We learn about Kyle’s brewing roots in both Wisconsin and Colorado as he traveled back home to open his hometown brewery. Lots of updates on the amazing liquid coming out of the experimental brewing and barreling projects at 1840, as well as news about the upcoming brewery-only pre-sale release this coming Saturday. Grab a “hipster” bottle of Cashmere Sweater and join us for the fun! Cheers!

Alex and Jim preview Episode 39 of the Tap Takeover Podcast with Kyle Vetter at 1840 Brewing Company with a tasting of the Cabernet Barrel-Aged Bier de Vin – an experimental wine/beer hybrid of an Imperial English Porter aged over fresh Syrah grapes in Cabernet Sauvignon barrels. A project 11 months in the making! And stay tuned for the full interview with Kyle coming this week! 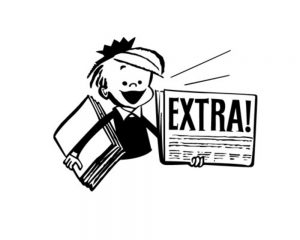 Stay up-to-date with a quick 5-minute Installment from the Beer News Department at the Tap Takeover Podcast! Certified Fresh as of 04/05/18. Grab a pint of Great Lakes Brewing’s Edmund Fitzgerald Porter and join us. Cheers!