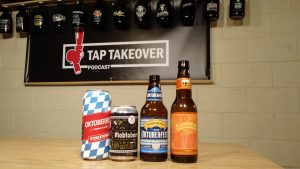 The changing colors and the cooler nights can only mean one thing: Oktoberfest beers! The boys are back in the studio for an Octoberfest tasting, trying four Marzen style beers. With so many being released now, we wanted to see what a couple of old friends and some larger breweries had to offer. In today’s episode, we tried the Oktoberfest beers from Fermentorium, Mobcraft, Bell’s and Sierra Nevada. Hear what the guys had to say about the 2018 offerings from these four breweries, and enjoy a little history lesson from Alex about why we celebrate Oktoberfest. Grab your favorite Oktoberfest beer and join us. Prost!

The crew catches up with Bill Morgan, brewmaster at Blind Pig Brewery in Champaign, IL. He has memories dating back to 1992 when he first started pouring at the festival! He tells us about the time those crazy kids at Bell’s made a boat out of of old kegs! Cheers!

The crew catches up with Stephen Hale, brewer at Schlafly: The St. Louis Brewery. He tells us the story of why a brewery that doesn’t distribute in Madison has made the trek every year since 1993. From the first trip in his 1990 Ford F-150, which he still drives to this day, to the great selections they brought in 2018. Check out Stephen’s thoughts on the event and the organizers. There is even a special guest half way through our visit. Great Taste of the Midwest Brewer Liaison, Fred Swanson. Check out this fun interview as the two guys relive some of their greatest memories at Graeat Tast of the Midwest!

This week, we’ve taken the Tap Takeover Podcast on a “beer-run” to visit Pulpit Rock Brewing in Decorah, IA! We sit down with head-brewers Robert Slack and Justin Teff as they lead us through a live tasting of their many highly sought-after brewery creations. In today’s episode we’ll be discussing Pulpit Rock’s ties to the Decorah community and it’s Norwegian heritage, the advantages and challenges of brewing in small, boutique batches, and we’ve got a number of shout-outs to many of Pulpit Rock’s collaborators and brewing friends. Grab a can of Show and Tell Blackberry Berliner Weiss and join us! Cheers! 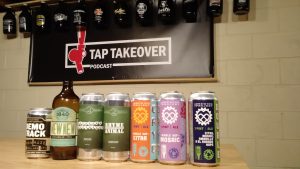 The Tap Takeover Podcast Crew get together for another special tasting episode. We wanted to pay tribute to the hazy beers of summer by trying the New England Style Hazy IPA’s. We’ll be discussing the transition of a “craze” into a “style,” what the additions of different hops at different times in the brewing process can mean for the flavor profiles, and the spectrum between “juicy” and “bitey.” The tasting begins with a side-by-side comparison of Eagle Park’s Demon Haze IPA and 1840’s New New Double IPA. Next up are two IPA’s from our trip to Decorah, IA to sit down with Bob and Justin at Pulpit Rock Brewing (interview episode to follow next week), with a single IPA Decorah’s Sweetheart and the double IPA Rhyme Animal. Then we round out our tasting with three offerings from the Brewing Projekt in Eau Claire, WI as we try the single-hopped Mosaic Dare Mighty Things, the single hopped Cryo-Citra “DMT,” and a Double version of the original DMT IPA. Grab a pint of something hazy and juicy and see if you agree with the guys’ assessment of the “haze craze!” Cheers!